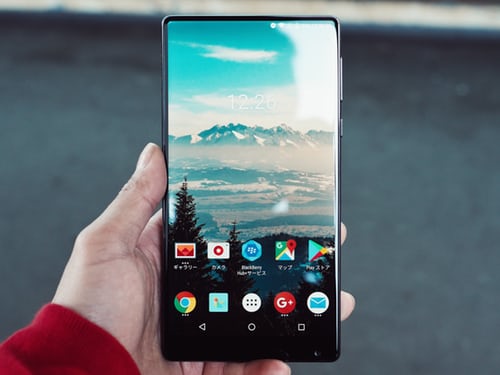 Home » News » Android 10 to make it to all existing Pixel phones from September 3!

Android 10 to make it to all existing Pixel phones from September 3!

Google broke away from its practice of naming Android OS after the name of popular desserts. It recently announced that the Android Q will be known as the Android 10 for simple nomenclature and thereafter the other versions of Android OS will be consecutively dubbed as Android 11, Android 12, and so on.

And just a couple of days after the announcement it has now been leaked that the Android 10 which is otherwise slated to launch with the Google Pixel 4 and 4 XL in October is arriving first on the incumbent pixel phones. The PhoneArena reports it will be on September 3 that the latest version of the Android OS will start rolling out.

Two Google customer support agents in chats with PhoneArena and one of its readers spilled the beans that the stable version of the Android Q (10) will be out on September 3. One of the agents in a reply to Android 10 support for the Pixel 3a wrote, “I would like to inform you that Android Q will be rolled out to the devices from September 3, 2019.”

According to PhoneArena, the Android 10 update will be pushed to the Pixel 3, Pixel 3 XL, Pixel 3a, Pixel 3a XL, Pixel 2, and Pixel 2 XL from next month. Hearteningly, the original Pixel and Pixel XL which came out in 2016 and are now out of the two-year window support will still be updated to Android 10.

Nevertheless, it must be noted that Google is yet to confirm regarding when exactly it will release its latest mobile operating system. Considering that in mind we should take this information with a pinch of salt. 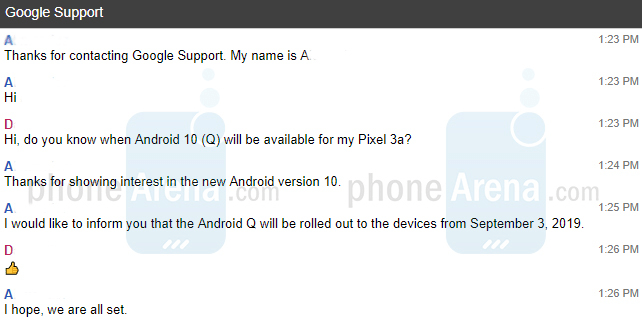 But, though not confirmed, September 3 for the rollout of Android 10 seems probable according to GSMArena. According to the publication, Google has the practice of releasing security patches each month on first Monday. If first Monday, in any case, turns out to be a holiday in the US, the rollout takes place the following day. Since the September 2 which is Monday but a Labor day, the rollout commencing on September 3 is very much likely.

For a reminder, the Android 9 Pie was also pushed out on the first Monday of August last year. This further bolsters the claim about Android 10’s rollout on September 3.

No matter when rollout begins it is seemingly credible that all the Google Pixel phones will be the first beneficiaries of this Android 10 update. Like always, the other vendors will, however, take some time in preparing this major software update for their devices.

The salient features that the Android 10 will bring to the table include native support for foldable smartphones, Smart Reply, Live Captions, Suggested Actions, improved security & privacy features, and most importantly the 5G support.

A few other features that will notably improve the experience of users are seamless background updates, improved digital wellbeing, better parental controls functionality, and not to forget a much-coveted system-wide dark mode.