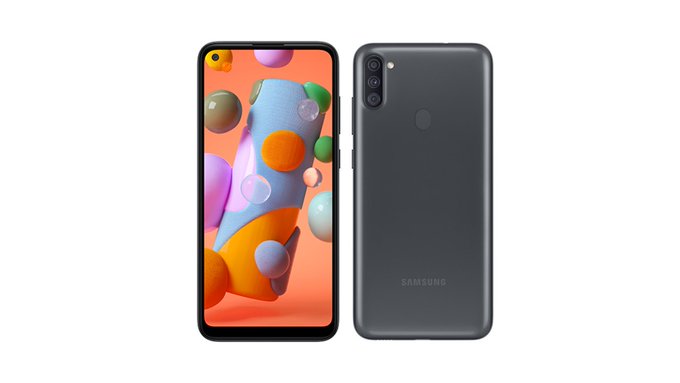 While we are waiting for the Galaxy A31 to launch in the coming weeks, Samsung has quietly made its entry-level Galaxy A11- the successor to the Galaxy A10 and Galaxy A10s- official on its website, revealing most of its specs. However, the Galaxy A11 is yet to get a release date as well as information about the markets the phone will make into.

The Galaxy A11 is listed with four color options such as Black, Blue, Red, and White. As the smartphone is geared towards entry-level it features a plastic back along with the plastic frame.

The smartphone has a fingerprint scanner and a vertically aligned triple camera module at the back. The front-mounted punch-hole cutout is placed on the top-left corner while the volume rocker and power button are lined on the right edge of the phone.

The Galaxy A11 is built around a 6.4-inch LCD HD+ (720x1560p) display. On the inside, the smartphone is fueled by an octa-core 1.8GHz SoC although the name of it remains unspecified. The processor will be paired with 2GB/3GB RAM and 32GB built-in storage, which can be expanded up to 512GB via microSD card.

Other details of the Galaxy A11 are so far not known since they are yet to be listed. Nevertheless, as the smartphone is expected to be launched in the coming days those bits of information will likely come to the fore quite soon.

Back in December last year Samsung had launched two low to upper mid-rangers, the Galaxy A51 and the Galaxy A71 with Infinity-O display and quad-rear camera setup. The devices are the successors to the Galaxy A50 and Galaxy A70 from last year.