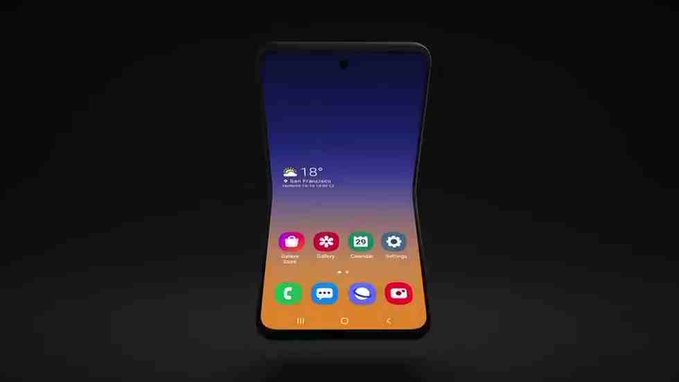 Home » News » This is Samsung’s next foldable phone with clamshell design!

This is Samsung’s next foldable phone with clamshell design!

The revamped Samsung Galaxy Fold went on sale recently, and the South Korean tech behemoth already has its plan ready for the next foldable phone. At Samsung Developers Conference yesterday, Samsung teased a video of its next-gen foldable phone which is compact and features a clamshell design with a new flexible display.

The new foldable phone folds vertically unlike the original Galaxy Fold which folds like a book. Also, the phone seems to be easily pocketable, which will open into a proper smartphone instead of a tablet-like form factor of the Galaxy Fold.

Samsung hasn’t revealed the moniker of the phone. However, XDA Developers says the device allegedly bears the SM-F700F model number while the News18 reports the phone is codenamed “Bloom” and so far in the industry circle is being referred to as the Galaxy Fold 2.

As per Samsung, the design shown in the video is for the illustration purpose only and subject to change in the future if the need arises.

Samsung hasn’t revealed anything related to the specs of the phone as well. However, the rumor mill has started conjecturing already. The alleged Galaxy Fold 2 or whatever it will be named will either sport an 8.1-inch or a 6.7-inch screen, giving it a compact nature as compared to the Galaxy Fold.

Besides that, the phone will use ultra-thin glass for durability. The smartphone is expected to integrate Qualcomm Snapdragon 865 SoC, up to 12GB RAM and a minimum of 256GB default storage. As of now, nothing has come to light with regard to the camera setup.

On the software front, the new foldable phone will boot One UI 2.1 based on Android 10. The phone for seamless folding will include two batteries out of which one will be of 900mAh capacity. The phone will also be armed with 45W fast charging technology besides being 5G enabled.

Despite the premium specs, the new foldable phone is likely to cost lesser than the original Galaxy Fold since it aims at the forthcoming Motorola RAZR 2019 to compete. Nevertheless, it must be borne in mind that Samsung has only teased the concept of the alleged Galaxy Fold 2 so the actual device might still be far away. If rumors are to be believed, it might only see the daylight in April next year.