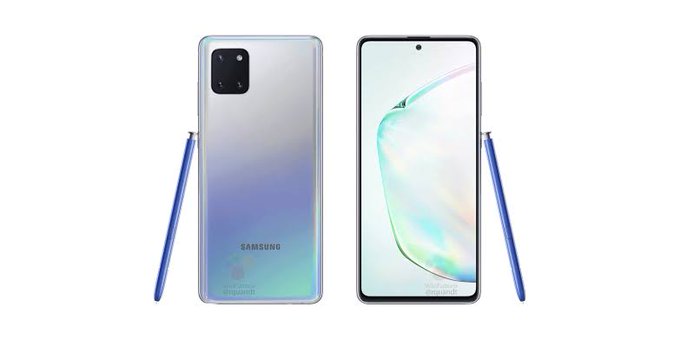 The Samsung Galaxy Note 10 Lite is around the corner considering with the rapid frequency it has been leaking in various ways. So far, it has cleared the FCC as well as Geekbench certifications besides lately hitting the web with the press renders.

And in the latest development, the device has leaked on Twitter courtesy of @Mr_TechTalkTV showing off its live images. Takeaways from the leak align with the design elements that the earlier press renders of the phone had given away.

The live images expose both the front and rear of the smartphone. Most importantly, in one of the images, the S Pen is also seen. The latter was first talked about when the smartphone had appeared on FCC.

Per the images, the Galaxy Note 10 Lite features a flat-screen as opposed to the curved screen of the original Galaxy Note 10 series. There is a tiny punch-hole cutout in the middle of the top portion of the display. The bezels, however, appear thicker compared to what we have seen in the Note 10 series.

Turning to the back, the Galaxy Note 10 Lite is seen sporting a square camera module at the top-left corner with three sensors along with an LED flashlight, unlike the vertical rear camera module on the Note 10 series.

Also, compared to the Galaxy Note 10 lineup’s glass back, the Note 10 Lite seems to be made of plastic. The fingerprint scanner will likely be embedded into the display as the same is absent from the back panel in the images. 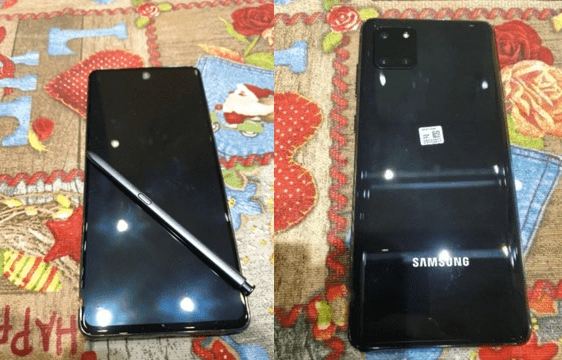 All the images showcase the phone in a single black color option along with the same colored S Pen.

As far as the specs are concerned, thanks to a bunch of earlier rumors, the Galaxy Note 10 Lite will likely pack a 6.7-inch FHD+ Super AMOLED display with HDR support.

On the software end, the Galaxy Note 10 Lite is almost sure to boot Android 10 with One UI 2 laid on top. A 4,500mAh battery with 25W fast charging support will supply fuel to the phone.

The hole-punch selfie camera is expected to be of 32MP resolution. At the same time, the triple-rear-camera setup supposedly consists of a 12MP primary sensor, a 12MP ultra-wide angle sensor, and a 12MP telephoto sensor with 2x optical zoom.

It must be born in the mind that Samsung is yet to acknowledge the impending Galaxy Note 10 Lite officially. However, the rumor mill is abuzz with the possibility of the phone breaking cover at CES 2020. The smartphone is rumored to cost around EUR620, which translates to approx. USD694.