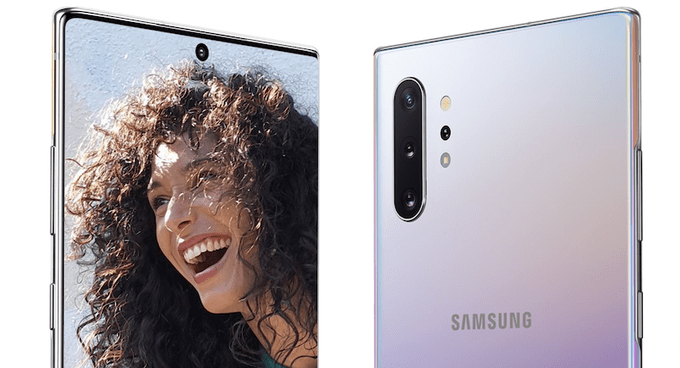 Both the devices feature Infinity-O Display which now sports a centrally aligned hole-punch cut out to house the selfie camera. Also, the rear-camera setup is re-positioned at the top left corner. The rear-mounted fingerprint scanner is gone, replaced with an in-display fingerprint sensor.

For the first time, the Note line has dropped the traditional 3.5mm headphone jack as well. Another shunned feature is the physical Bixby button, but its functionality has now been transferred to the power button.

The Cinematic Super AMOLED Display is now more expansive and edge-to-edge than what is seen in the Galaxy S-series. The display supports HDR10+ and for blocking blue light it is also TUV Rheinland certified.

In terms of specs, the Galaxy Note 10 and Note 10+ are almost identical except for a few differences spotted in display size and resolution, battery, storage, and the rear-mounted camera module.

The Note 10 features a 6.3-inch full HD+ display with 401-pixel density while the Note 10+ comes with a larger 6.8-inch Quad HD+ display with 498-pixel density. On the inside, both the phones are powered by Samsung’s latest 7nm Exynos 9825 SoC which is faster and more power-efficient than the 8nm Exynos 9820 SoC used in the Galaxy S10 series of phones. Besides the Exynos 9825 SoC, in select markets, Samsung will also use Qualcomm Snapdragon 855 SoC.

A 16MP ultra-wide sensor with f/2.2 aperture, a 12MP wide-angle sensor with f/1.5-f/2.4 dual apertures, and another 12MP telephoto sensor with f/2.1 aperture are assembled to form a triple camera setup on the back of the Note 10.
The Note 10+ also uses the same three sensors but adds a fourth ToF DepthVision sensor to make it a quad-rear-camera setup.

Are you facing any Problem or need any help? Get Fast Help from our community experts. 🤗
Check Out  OPPO Reno 2 key specs confirmed ahead of August 28 launch

The smartphones sport a 10MP selfie camera ensconced in the hole-punch. Both the Note 10 devices come with a Live Focus Video mode that blurs and changes the background of a video while another Zoom in Mic feature lets the users enhance the audio of a specific subject.

The iconic S Pen now comes in the mono-color design and with a better battery to last longer. The S Pen is armed with gesture-controlled “Air Actions” feature for touch-free commands and possesses a new ability to convert the S Pen written notes into a Word or PDF document. The productivity feature, the DeX mode lets the Note 10 pair seamlessly connect to Windows PCs. Other important aspects of the Note 10 series include IP68 certification, Bluetooth 6, NFC support, and USB Type-C port.