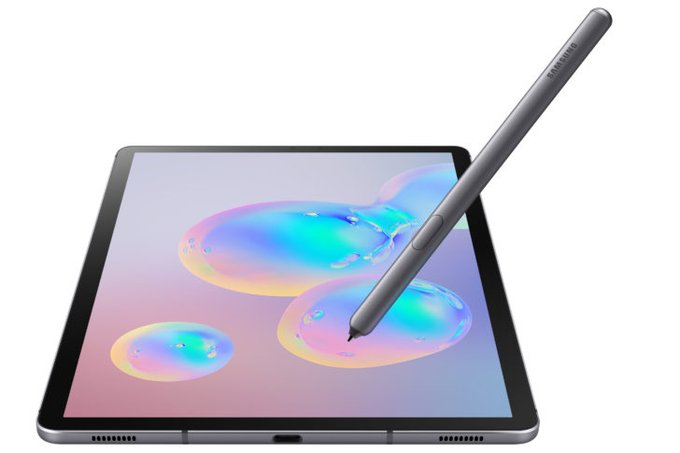 The Samsung Galaxy Tab S6 comes with AMOLED display, octa-core processor, four speakers, and also the improved S Pen coming out-of-the-box. The tablet no longer holds an insert for S Pen; rather the latter sticks magnetically on the back of the tablet.

The Galaxy Tab S6 comes with a keyboard cover with a full functioning trackpad, allowing users a 2-in-1-like experience. The tablet also has the DeX mode that mimics a desktop-like layout on the screen.

In terms of specifications, the Galaxy Tab S6 sports a 10.5-inch WQXGA Super AMOLED display with 16:10 aspect ratio. It derives stamina from the 7nm octa-core Qualcomm’s Snapdragon 855 SoC paired with 6GB/8GB RAM and 128GB/256GB internal storage that can be expanded up to 1TB via microSD card.

On the optics front, a vertically aligned dual-rear-camera setup on the Galaxy Tab S6 comprises a 13MP primary sensor and a 5MP secondary 123-degree ultra-wide-angle sensor. The front is laced with an 8MP selfie camera.

For fuel, the tablet makes use of a 7,040mAh battery that allows fast charging support via USB Type-C Port. It also has a smaller 0.35mAh battery for S Pen to charge it wirelessly. It runs Android 9 Pie with One UI 1.5 laid on top.

With a powerful specs package and latest Android features, the Tab S6 is a timely and much-needed tablet for Samsung to take the fight to Apple’s iPad Pro which has been at the pole position in the premium tablet segment.

While it remains to be seen how the Galaxy Tab S6 will fare against the iPad Pro, some lacunae of the Galaxy Tab S6 can’t be overlooked. The tablet doesn’t have the 3.5mm audio jack nor it ships with a USB Type-C to 3.5mm jack dongle. Also, the iP67/68 rating for water and dust resistance would have gone a long way in assuaging the customers’ apprehension about the durability of the tablet.

Are you facing any Problem or need any help? Get Fast Help from our community experts. 🤗
Check Out  Vivo launches Vivo U20 with Snapdragon 675 SoC and 5,000mAh battery in India

The Samsung Galaxy Tab S6 goes on sale on September 6 priced at USD649 for the 6GB RAM+128GB storage model and USD729 for the 8GB RAM+256GB storage model. Initially, Wi-Fi variants will be available to purchase with LTE variants joining the sale later this year. The tablet will come in three colorways: Mountain Gray, Cloud Blue, and Rose Blush.

Redmi Note 8 series: What we know so far ahead of...