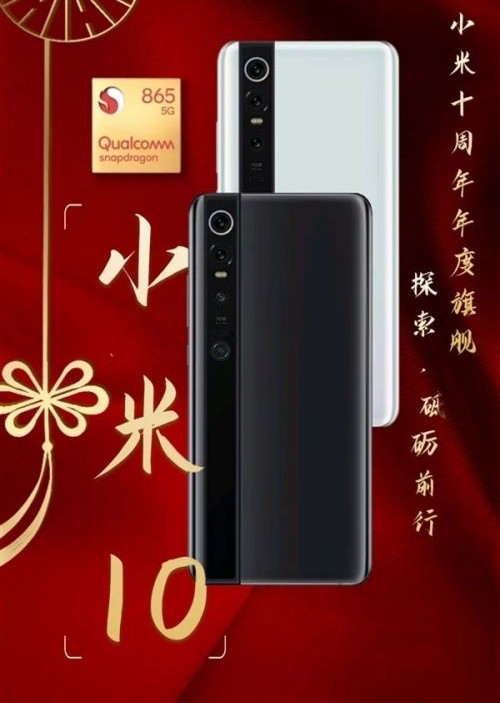 The Mi Note 10 has been swirling around the rumor mill for quite some time now tipping us about the design language, expected specs, and even the pricing. Now thanks to an official-looking poster on Weibo (Via GizChina) the launch date of the device is also out in the open.

Interestingly, the Xiaomi Mi 10 will make its debut on February 11 on the same day Samsung will unpack its Galaxy S20 series. The Weibo poster, besides divulging the launch date, also features an image in which the back of the Mi 10 is exposed.

As per the image, the Mi 10 in sync with the recently showcased Xiaomi Alpha sports on the top-left corner of the back panel a vertically-aligned quad-rear camera module in a black stripe that runs towards the bottom. Additionally, the power button and the volume rockers are seen lined on the right edge of the phone.

The leak doesn’t reveal the specs except for the chipset the phone will be making use of. The poster image shows Qualcomm’s latest Snapdragon 865 SoC with 5G to be powering the device. To note, the new Snapdragon 865 SoC ensures 20% GPU and 25% CPU performance boost when compared to its predecessor, the Snapdragon 855 SoC.

If the rumors from the past are any indications, the Mi 10 will come in a pair. The Pro version will get a curved-edge display while the vanilla Mi 10 will have a flat-screen design. They are said to pack a 6.5-inch common OLED screen with a 90Hz refresh rate though.

While recent renders have suggested a pill-shaped punch-hole cut out for dual selfie cameras a few reports have also indicated a single selfie camera setup for the device. So, still, there is a lack of clarity on this matter.

Nevertheless, the quad-camera setup on both the variants will be headlined by a 108MP primary sensor. In terms of the other three rear sensors, the Mi 10 Pro will feature 48MP, 12MP, 8MP camera array whereas the regular Mi 10 will have a 20MP, 12MP, and 5MP camera configuration.

Both the variants will stuff a common 4,500mAh battery inside. However, the Pro version will take advantage of 40W fast charging compared to 30W fast charging support in the regular version.

Earlier it was expected that the MI 10 series would be unveiled ahead of the Samsung Galaxy S20 launch. But by planning to launch the Mi 10 on the same day of the launch of Galaxy S20 Xiaomi is trying to send out a message to its fan base that it will go toe to toe with Samsung even in the premium space, that after giving the latter a tough fight in the budget and mid-range segments.