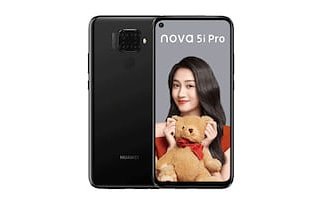 HUAWEI has a good spread of handsets in its Nova series that caters to almost entire mid-range spectrum. Recently, in June, the company launched the HUAWEI Nova 5, Nova 5 Pro, and Nova 5i in China and now it is has added a fourth phone, the Nova 5i Pro, in the Nova 5 lineup. The Nova 5i Pro sits between the Nova 5 and Nova 5i.

The Nova 5i Pro is launched with a quad-rear-camera setup, hole-punch display, and Kirin 810 SoC with GPU Turbo support as some of the salient features to brag about. The Nova 5i mainly comes with a bump on camera and processor front, but sports a slightly smaller display compared to the Nova 5i.

The Nova 5i Pro comes in Midnight Black, Aurora, and Emerald Green color options. It is up for preorders in China ahead of the scheduled sale starting August 2.

The device comes with a total of five cameras, four are there on the back while one is on the front buried inside the hole-punch cut out situated on the top left corner of the display. The rear-camera-setup is in square-shaped layout similar to the HUAWEI Mate 20.

The setup includes a 48MP primary sensor with f/1.8 aperture, an 8MP wide-angle sensor, a 2MP macro sensor, and again a 2MP sensor for depth sensing. On the front, a 32MP camera with f/2.0 aperture handles the selfie stuff.

A 4,000mAh battery keeps the entire things ticking with the support of 22.5W fast charging via USB Type-C port. On the software side of things, the Nova 5i Pro boots Android 9 Pie with company’s user interface EMUI 9.1 laid on top.

There is a fingerprint scanner for biometric authentication on the textured shiny rear panel of the device much like the Mate 20 series. Other connectivity options include 4G LTE, Wi-Fi, Bluetooth 5.0, GPS, 3.5mm audio jack, and USB Type-C Port.

There is no word as to when the Nova 5i Pro will launch in other markets. There is, however, a feeble buzz going around that it will launch in international markets as the HUAWEI Mate 30 Lite. Let’s see if that happens. We will let you know, as always.

Was this article helpful?
YesNo
Check Out  ASUS ROG Phone 2 specifications leaked ahead of launch
Get Help on The Forum

The upcoming Google Pixel 4 will use a radar for hands-free...

Redmi Note 8 series: What we know so far ahead of...