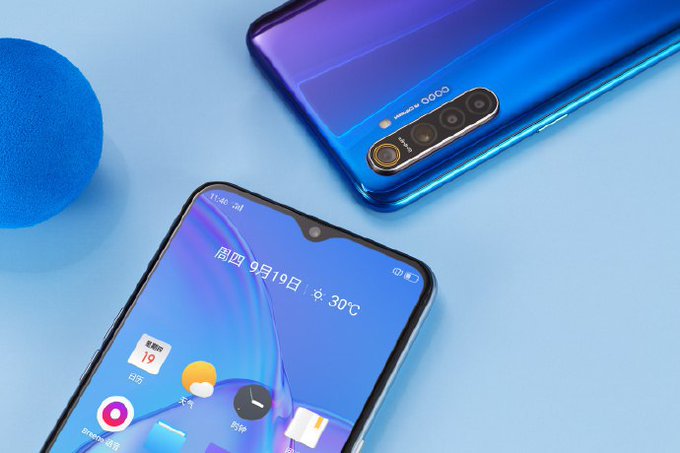 Earlier this month Realme launched the Realme XT with 64MP camera in the Indian market and a variant of the same phone has now seen the daylight in China with the moniker, the Realme X2. The latter has the same spec sheet as the Realme XT, but in some aspects, it has been ratcheted up.

The Realme X2 gets better gaming focused Snapdragon 730G processor and instead of the VOOC 3.0, it now supports the latest VOOC 4.0 Flash Charge.

On the inside, the Realme X2 is underpinned by the 8nm Qualcomm Snapdragon 730G octa-core SoC which is purpose-built for gaming. Compared to Snapdragon 712 SoC present in the Realme XT, it is a significant upgrade.

The Realme X2 packs Adreno 616 GPU, 6GB/8GB RAM and 64GB/128GB internal storage based on UFS 2.1. The storage can be expanded up to 256GB via microSD card but using only the shared SIM slot.

There is no change in camera specs, the Realme X2 shares the quad-rear camera setup with the Realme XT. The rear camera setup includes the feted 64MP f/1.8 ISOCELL GW1 sensor from Samsung, which is coupled with an 8MP wide-angle sensor with 119-degree field of view, 2MP macro sensor, and another 2MP depth sensor.

Upfront, there lies a 32MP selfie shooter packing inside the water-drop notch, also acting as face unlock. The front and back cameras are equipped with electronic image stabilization (EIS) for videos.

On the software front, the Realme X2 runs Android 9 Pie with ColorOS 6 on top. A 4,000mAh battery fuels the device but unlike 30W VOOC 3.0 Flash Charge in the Realme XT it is now supported by a 30W VOOC 4.0 Flash Charge unveiled just a week ago by OPPO. The smartphone supports 4G VoLTE, Wi-Fi, GPS, Bluetooth 5.0, NFC, USB Type-C port, and 3.5mm headphone jack.

Are you facing any Problem or need any help? Get Fast Help from our community experts. 🤗
Check Out  Vivo S5 with punch-hole OLED display and 48MP quad camera launched

As of now, it is shrouded in mystery if the Realme X2 will be carried forward to other markets but it is already announced by Realme India that it will be launching in India in December with Realme XT 730G branding. Let’s see which other markets will get it.

The PUBG killer “Call of Duty” makes debut on Android and...

The upcoming Google Pixel 4 will use a radar for hands-free...

Redmi K30 is not launching before 2020: Here is the reason