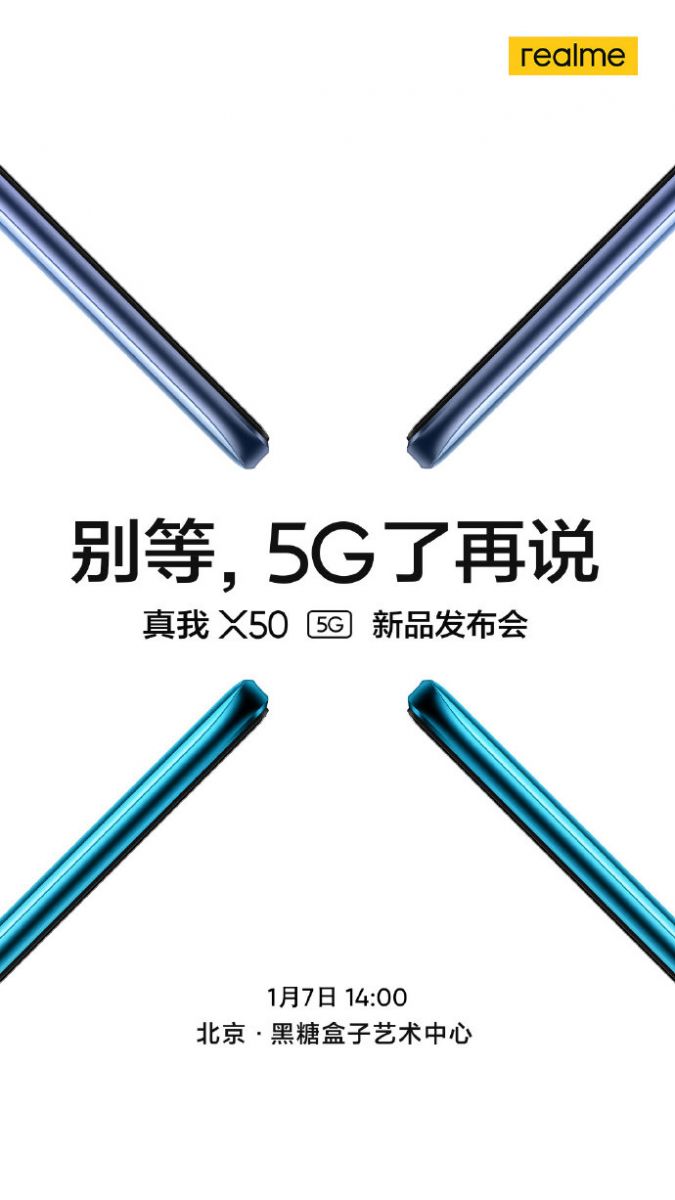 Realme after the launch of the Redmi K30 from its arch-rival Xiaomi has announced via a Weibo post that it would bring its 5G compatible smartphone, the Realme X50 5G, next year on January 7 in China. The smartphone has already been teased several times in the past revealing some critical aspects.

What the company has so far teased includes dual 5G modes, Stand Alone (SA), as well as Non-Stand Alone (NSA), for the smartphone that will be underpinned by the newly launched Snapdragon 765G SoC, the same one which powers the Redmi K30.

The Realme X50 5G will also mount dual selfie cameras situated inside a pill-shaped cutout on the top-left of the display. The phone is reported to have strapped a quad-camera setup on the rear.

Another vital aspect that the company revealed previously about the phone is the support for enhanced SuperVOOC 4.0 Flash Charge that will fill the phone with juice up to 70 percent in just half an hour.

While the official announcement about the launch of the Realme X50 5G doesn’t reveal anything other than the time and date of launch, another post on Weibo has gone live talking about the expected specs of the upcoming phone.

The speculated specs jive well with what the Realme had already spilled in this regard. The post says a 7nm Snapdragon 765G SoC will indeed power the Realme X50G paired with Adreno 620 GPU allowing for SA and NSA dual 5G modes.

Besides that, if other rumors are taken into account, the Realme X50 5G is likely to pack a 6.44-inch Super AMOLED display with 90Hz refresh rates. For a perspective, the display of the Redmi K30 has up to 120Hz refresh rates but uses an LCD screen.

The processor inside the Realme X50 5G is expected to be backed by up to 8GB RAM and 256GB internal storage while the device will derive fuel from a likely 4,500mAh battery equipped with wireless charging as well.

On the optics front, the Realme X50 5G will likely wield a 32MP primary and an 8MP wide-angle selfie shooters as part of dual-selfie camera setup.

A 64MP primary sensor will bolster the rear-mounted quad-camera setup. The other three sensors on the back are expected to be an 8MP wide-angle sensor, 2MP macro sensor, and another 2MP depth sensor.

The rear camera configuration, especially the macro sensor, might change when the phone finally launches as the rival Redmi K30 uses a 5MP macro sensor.

However, as of now, details about the Youth Edition remain shrouded in mystery. More information will expectedly spill out soon. Stay tuned with us for more updates.

Nubia Z20, which has two screens is now available in global...