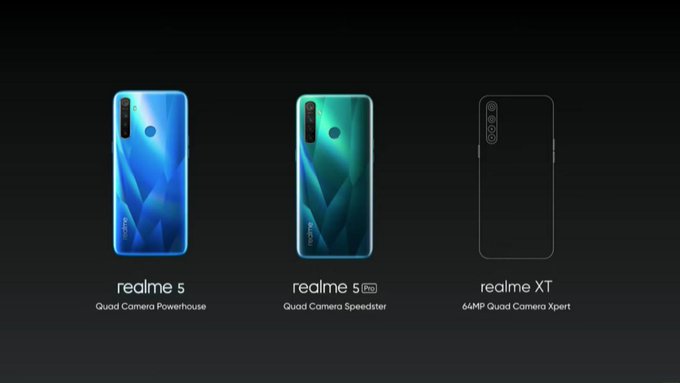 The Realme XT will be the part of Realme’s newly minted X series under which the company launched a premium mid-range smartphone, the Realme X last month with Super AMOLED display, pop-up selfie shooter, in-display fingerprint scanner, and a Snapdragon 710 SoC.

Only a zilch is known at this point of time about the specs and features of the Realme XT. Seth, however, hinted that the Realme XT will be the “complete expert” in its price segment. No revelation regarding the launch date was made but Seth hinted it might launch towards the end of September or early October coinciding with the Diwali festivities in the country.

The Realme XT will mount four cameras on the rear including a 64MP primary sensor. Realme has already made it public that its 64MP sensor is the Samsung’s ISOCELL Bright GW1 sensor that was unveiled back in May this year.

The ISOCELL Bright GW1 sensor uses the company’s Tetracell technology where it combines four pixels into one pixel and delivers 16MP photos in low light conditions with the ability to capture raw 64MP photos in bright conditions.

Besides the 64MP sensor, the Realme quad-camera- setup is expected to include different sensors for various shooting options. Similar to Realme 5 series it will probably comprise a wide-angle sensor, a macro sensor, and a portrait sensor.

It remains to be seen if the Realme XT will echo the same design and specs of the Realme X, However, we can predict some of the features from the Realme X such as AMOLED display, in-display fingerprint scanner, and pop-up selfie camera for the Realme XT as well.

Other than Realme, Redmi and Samsung are also readying their 64MP camera smartphones most probably the Redmi Note 8 and the Galaxy A70s for prime time. While the Redmi Note 8 is expected to see the daylight on August 29 in China the Samsung’s offering will come out most likely in October this year.


Are you facing any Problem or need any help? Get Fast Help from our community experts. 🤗
Check Out  POCO new smartphone launching next month
Was this article helpful?
YesNo
Get Help on The Forum

A new Motorola smartphone with 5,000mAh battery surfaces on FCC