Of late, Xiaomi has been in the news for the upcoming MI 10 smartphone, but this is not the only phone that the company is prepping. Its sub-brand Redmi is working on the Redmi K30 Pro as well. To note, the other sibling Redmi K30 had already been launched back in December last year.

The Redmi K30 Pro earlier was spotted on TENNA, and now the device has appeared on Geekbench database. The Geekbench listing suggests the Redmi K30 Pro will come helmed by Qualcomm Snapdragon 865 SoC mated to 8GB RAM.

For the uninitiated, Snapdragon 865 SoC is the latest mobile chipset from Qualcomm bringing 20% GPU and 25% CPU performance boost over its predecessor, the Snapdragon 855 SoC.

The chipset for the alleged Redmi K30 Pro is listed as “ARM implementer 65 architecture 8 variant 1 part 3341 revision 0”, which matches the description for the SoC (Snapdragon 865) listed on Geekbench for the OnePlus 8 Pro.

On the performance benchmark, the Redmi K30 Pro has managed to score 903 single-core points and 3,362 multi-core points on Geekbench 5. The scores are more or less on par with the scores churned out by a reference device using Snapdragon 865 SoC shown at the Snapdragon Summit in December last year. 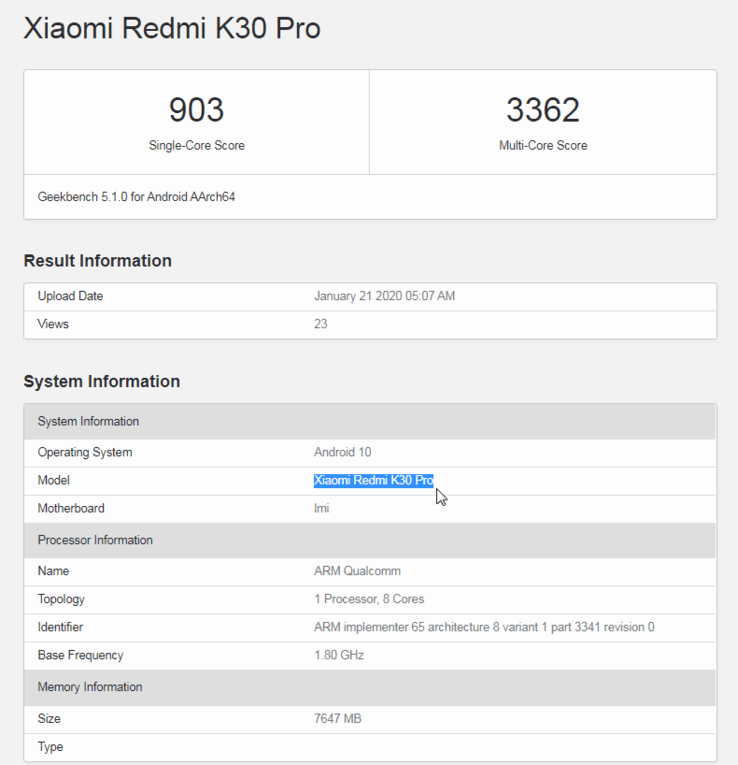 Apart from the SoC and RAM information, the Geekbench doesn’t reveal much about the Redmi K30 Pro specs. However, if the TENAA listing back in December 2019 is taken into account, then pretty much more details about the smartphone are out in the open.

According to TENNA, the Redmi K30 Pro may pack a 6.67-inch full HD+ LCD screen. The smartphone will have 5G compatibility and pack up to 12GB RAM alongside 128GB/256GB/512GB built-in storage. The expected Snapdragon 865 SoC will be clocked at 2.4GHz while the battery will be rated at 4,400mAh.

On the design front, the Redmi K30 Pro is expected to feature the same design language as the Redmi K30 with a pill-shaped cutout for dual-selfie cameras on the front and triple cameras at the back. The smartphone will measure 165.4×76.6×8.8mm in dimension and weigh 209 grams.

The Redmi K30 Pro is more likely to launch in February maybe after the launch of the Xiaomi Mi 10 series allegedly to take place on February 11. So far, it is not known how much the Redmi K30 Pro will cost. Nevertheless, given the company’s propensity to price its devices in the affordable ballpark, it is said that the Redmi K30 Pro with all its top-of-the-line specs will be priced under USD450.

Anyways, since the Redmi K30 Pro is still a good many days away from its launch, more details regarding the device will hit the internet in the future. You stay tuned with us to read the updates here as and when they surface.