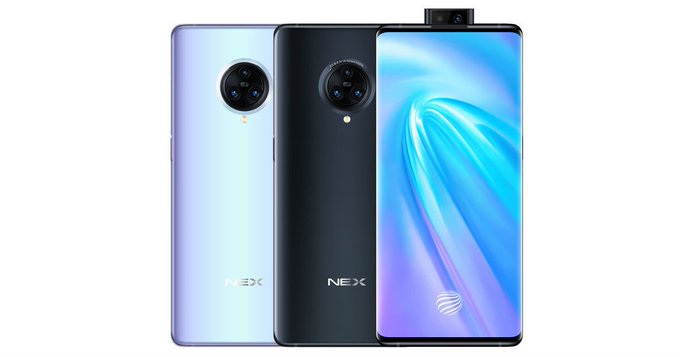 Vivo NEX series is meant for introducing cutting-edge technology with smartphones falling under it. To recall, the Vivo NEX S arrived last year with pop-up selfie camera and in-display fingerprint sensor and now Vivo has launched another phone in this series, the Vivo NEX 3, of which claim to fame is the waterfall display- world’s first, as the company claims.

The Vivo NEX 3 is also a 5G smartphone that packs a Snapdragon 855 Plus SoC along with Qualcomm’s X50 modem while it comes with 64MP triple rear camera and a host of other exciting features. Nevertheless, the Vivo NEX 3 is also offered in 4G model without losing any specs or features except the 5G support.

Talking about the waterfall display which is basically a curved one but it drops off completely to the sides at a 90-degree curvature. As the sides have been fully taken up by the display the side-mounted buttons have now been replaced with capacitive buttons similar to the Vivo APEX.

The display used in the Vivo NEX 3 is OLED with 1080p resolution and it spans 6.89-inch diagonally. Thanks to its waterfall display and the pop-up selfie camera the phone acquires incredibly high 99.6% screen-to-body ratio. The display also embeds a fingerprint scanner. The back of the phone is glass separated by an aluminum frame from the screen. 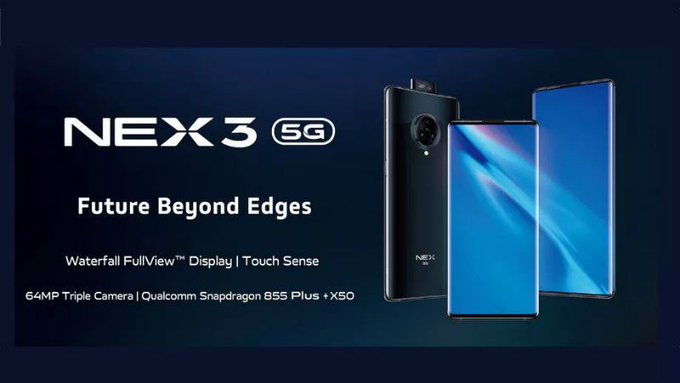 The camera is another standout aspect of the Vivo NEX 3 as it includes a 64MP primary sensor in the circular “Lunar Ring” rear camera setup that has another two 13MP sensors on board- one is telephoto while the other one is wide-angle. The pop-up camera keeps a 16MP shooter for selfies.

Under the hood, the Vivo NEX 3 is powered by 7nm Qualcomm Snapdragon 855 Plus SoC paired with Adreno 640 GPU and UFS 3.0 storage with no expansion support. The phone is armed with Vapor Chamber Cooling system preventing the phone from heating.

The smartphone runs FuntouchOS 9.1 based on Android 9 Pie but will bump to Android 10 quickly. A 4,500mAh battery backs the phone with a whopping 44W ultrafast charging support. There is no wireless charging support. Amongst other things the Vivo NEX 3 supports HDR 10, NFC, and Viv0’s own Jovi Assistant.